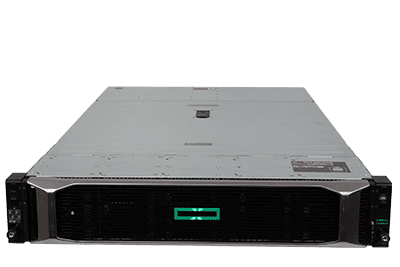 The HPE Apollo r2600 Gen10 server, like its predecessor, is designed for Big Data, High-Performance Computing, and a host of other critical computing tasks that can take advantage of this density-optimized system. There are two HPE ProLiant blade servers supported on this system, The half-height, half-width HPE ProLiant XL170r Gen 10 server and the full-height, half-width HPE ProLiant XL190r Gen10 server. Utilizing a standard form factor, this system will easily integrate with traditional data centers driving higher levels of compute density, efficiency, and system scaling.

The HPE R2600 Gen10 chassis supports the server nodes with power, cooling, and storage, while the server nodes provide the compute and I/O. Two power supply units up to 2200W provide power for up to four nodes. Four single rotor fans provide cooling but can be upgraded with four additional fans for redundancy. An optional Rack Consolidation Management module (RCM) on the back of the system enables iLO Aggregation and enables the chassis to be daisy-chained together and connect to a top of cassis management switch. Up to 20 r2600 Gen10 chassis can be installed in a standard 42U enclosure for up to 80 individual servers if outfitted with the XL170 Gen10 chassis. Gen9 XL170r and Gen9 XL190r server nodes are not compatible with the Apollo R2600 Gen10 Chassis, and Gen10 server nodes are not compatible with the Gen9 chassis.

The HPE R2600 supports up to 24 x 2.5-inch storage devices up front with each of the four server nodes allocated and equal number of drives. Each node is equipped with a single micro SD card. 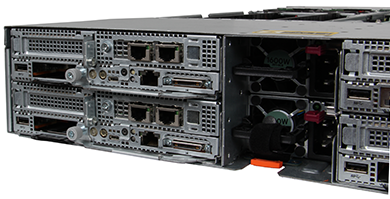 Expansion slots are housed in the server nodes with the ProLiant XL170 Gen10 supporting a primary and secondary riser in back with a single PCIe 3.0 slot for each riser supporting I/O options including 1GbE up to 100GbE with Omni-Path, FibreChannel, and InfiniBand. The ProLiant XL190 Gen10 offers more expansion options with up to four PCIe slots and room for one or two Nvidia Accelerators or enhanced I/O options.

A Rack Consolidation Module (RCM) on the back of the system allows you link several Apollo chassis together for iLO aggregation at the chassis level. It can also be connected to an HPE Apollo Platform Manager (APM) for a rack-level power and system management solution. HPE’s Insight Cluster Management Utility is also available enabling easy deployment and management of High-Performance Computing (HPC) clusters.

This shared infrastructure chassis supports up to 24 2.5-inch storage devices in a 2U space plus one to four server nodes, each of which can support dual intel Xeon Scalable processors. The HPE Apollo r2600 Gen10 Chassis is also designed to address small, medium, and large enterprise businesses with a building-block approach to scaling your network and business.