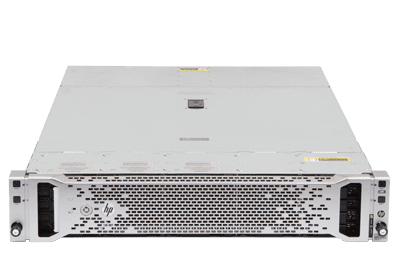 The Apollo 2000 line is targeted at dense compute applications like high-performance computing (HPC) but can also be used for a remote office deployment and traditional data centers. The HPE Apollo r2600 Gen9 Chassis is a hyper-converged platform that supports one, two, or four compute nodes within a compact 2U server chassis. There are three models to choose from the r2200, r2600, and r2800 gen9 server nodes. The Apollo r2600 and r2800 support 24 SFF storage devices up front, and the r2200 supports 12 LFF drives up front.

The Apollo r2600 Chassis features up to 24 hot-swap drives up front and with four compute nodes, which plug in from the back. The Apollo 2000 family is a converged infrastructure platform, with storage, cooling, and power supported in the chassis, while compute, memory, and network communications are handled by the compute nodes.

* NOTE: The Gen10 versions of the above server nodes are not supported by the Gen9 chassis.

The Apollo r2600 Gen9 chassis will support either four 1U ProLiant XL170r Gen9 compute nodes, two 2U ProLiant XL190r Gen9 compute nodes. Both the 1U XL170r and 2U XL190r compute nodes support either one or two Intel Xeon E5-2600 v3 or v4 processors with up to 22 cores. However, with the 2U form factor on the 2U XL190r Gen9 can support one or two Nvidia Tesla GPUs or Intel Xeon Phi coprocessors. The r2600 Chassis comes with four single rotor fans and will support four additional fans for redundancy. Powering the system are either two 800W or two 1400W power supplies.

All memory on the HPE r2600 Chassis is supported on the compute nodes. Memory capacity is the same for both the HPE ProLiant XL170r Gen9 and the ProLiant XL190r Gen9 server nodes. Each will support a maximum capacity of up to 512GB using 32GB Load-Reduced (LRDIMM) memory modules in all slots. 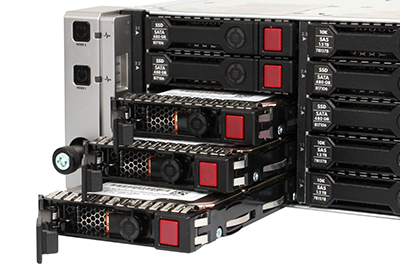 The HPE Apollo r2600 Gen9 Chassis is a great option for high performance computing with support for up to four dual-socket compute nodes in a 2U chassis. Administrators can start out with a single chassis and a single compute node and add more nodes or fully configured chassis to quickly scale as business needs grow.

A chassis requires that four (4) server tray slots be populated with either an HPE ProLiant XL170r, XL190r server or an HPE Apollo 2000 Server Tray Blank Kit.