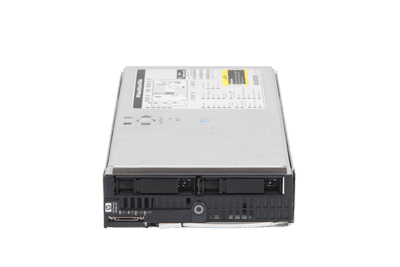 HPE’s ProLiant BL460c Gen7 blade server is designed specifically for the HPE BladeSystem c3000 and c7000 enclosures. The c3000 will support up to eight HPE BL460c Gen7 blades while the c7000 can support twice that many. Both enclosures are backwards and forwards compatible to support several generations of blade servers. The shared infrastructure design offers reduced power consumption, shared cooling, management, and less cabling clutter than a traditional rack mounted server.

Intel’s 5520 Chipset supports a maximum of two Intel Xeon 5600, four or six core processors. DDR3 memory is supported offering data transfer speeds of 800MHz, 1066MHz, and a maximum of 1333MHz depending on the memory configuration.

The system board supports 12 memory slots total with each processor supporting six memory slots at up to 1333MHz, depending on your choice of processor. Choose from registered (RDIMM) or unbuffered (UDIMM) DDR3 memory modules. Maximum supported memory is achieved using 12 RDIMM modules for a total of 384GB in a two processor configuration. UDIMMs will provide a maximum of 48GB with all twelve slots loaded. 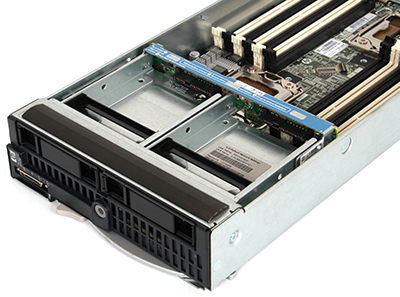 The front of the blade supports a maximum of two hot-plug small form factor (SFF) SAS, or SATA HDDs or SSDs. Storage devices cannot be mixed within the server. The onboard storage is supported by an HPE Smart Array P410i controller located under the drive bays. Additional external storage controllers are supported in the expansion slots.

HPE’s Integrated Lights Out (iLO3) 3.0 is supported on this system to simplify server setup, health monitoring, power, and thermal controls. There are also several other management tools available to help you get the most out of your system.

The ProLiant BL460c Gen7 server is designed for the HPE BladeSystem c3000 and c7000 enclosures, which offer a shared infrastructure design and supports backwards and forward compatibility across multiple generations of blades. Cooling, power, and management are handled at the chassis level resulting in a lower cost per server with reduced cabling, power, and airflow requirements in comparison to individual rack mounted servers. With a blade enclosure, the management and network interconnects can pool and share resources across multiple enclosures and can split dual and quad port network connections between interconnects for increased throughput and redundancy.

NOTE: SAS, SATA, and/or SSD drives cannot be mixed within the server.

Supports up to two (2) mezzanine cards: