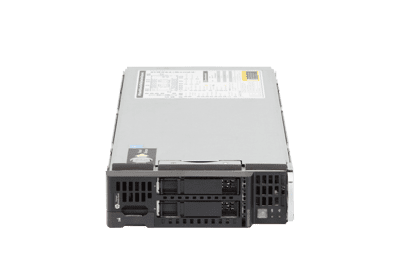 The HPE BL460c Gen9 is described by HPE as “the world’s most popular server blade”. It delivers more performance than its predecessors with support for Xeon v4 processors and DDR4 memory. It’s the standard for dense data center computing. Persistent memory options provide a definite boost in speed of analytic processing and data management. This blade can be configured to support a number of different workloads and is a great addition for demanding core IT applications and data center deployments. The BL460c can be installed in either the c3000 or c7000 blade enclosures, which offer compatibility across multiple generations of blades. Cooling, power, and management are handled at the chassis level resulting in a lower cost per server with reduced cabling, power, and airflow requirements in comparison to individual rack mounted servers. With a blade enclosure, the management and network interconnects can pool and share resources across multiple enclosures and can split dual and quad port network connections between interconnects for increased throughput and redundancy.

Up to two Intel Xeon E5-2600 v3 or E5-2600 v4 processors can be installed and support 4 to 22 cores. V4 processors provide a 21% increase in performance over the v3 version. All processors support Intel Hyper-Threading and Intel Turbo Boost Technologies. However, using certain Xeon v3 and v4 processors will block access to DIMM slots 4 and 5 and will only support 12 of 16 total DIMM slots. 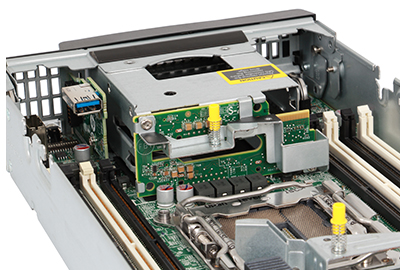 There are 16 memory slots total with each processor in charge of eight memory slots, except under certain conditions described above. HPE SmartMemory DDR4 load-reduced (LRDIMM) and registered (RDIMM) memory modules are supported offering advanced ECC. LRDIMM modules will provide the greatest total capacity using 16 128GB memory modules for 2TB of memory total and transfer speeds of up to 2400MT/s. RDIMMs will provide a maximum of 512GB of memory using 32GB memory modules. To attain the maximum supported memory speed of 2400MT/s requires a compatible processor. Quantity and type of DIMMs installed will also affect memory speed.

The BL460c supports a maximum of two SFF SAS, SATA HDDs or SSDs, or two hot plug NVMe SSD drive bays. With SATA or SAS SSDs the system will support 7.68TB of storage. For the other options, only 4.0TB is supported. An M.2 enablement kit will provide additional super-fast storage or can be used as a boot device. Storage controllers include the HPE SmartArray P244br, the Smart HBA H244br, or the HP B140i SATA in addition to optional dual port Fibre Channel mezzanine cards for redundant SAN connections. 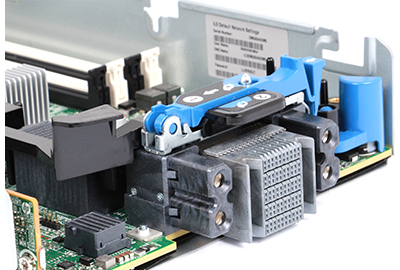 Two PCIe 3.0 slots are available on the system with the addition of optional mezzanine risers and can support dual port 10Gb and 20Gb FlexFabric, dual port Fibre channel HBA, QDR and FDR InfiniBand for low latency and high-bandwidth, and I/O accelerator options. A single processor will provide access to a single expansion slot. Access to the second expansion slot requires a second processor. A midplane at the chassis level connects the server blades at an aggregate bandwidth of 7 TB/s to network and shared storage via the NonStop midplane, which then feeds in to the interconnect modules located on the back of the blade enclosure housing the actual network port. 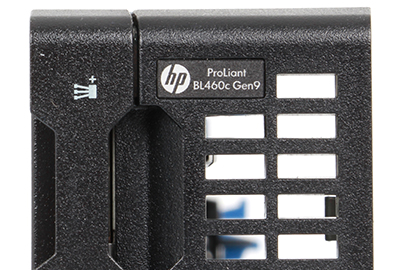 HPE ProLiant BL460c Gen9 is a half-height server blade that plugs into the HPE BladeSystem c3000 and c7000 enclosures.