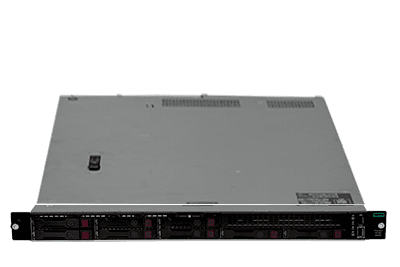 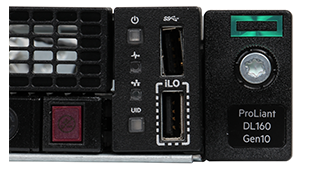 With the HPE ProLiant DL160 Gen10 server’s just-right size this system supports a maximum of 256GB of memory using either two Silver 4110 processors or two Bronze 3106 processors. Power is provided by either a cabled PSU or dual hot-swap power supplies.

Supported drive configurations on the HPE DL160 Gen10 server include 4 x 3.5-inch drives or 8 x 2.5-inch drive. A micro SD card slot on the motherboard, towards the back of the system, provides storage for a hypervisor. SATA HDDs and SSDs are supported natively with three SATA ports on the system board. For SAS or NVMe HDD or SSD drive support, you will need an optional SmartArray RAID controller offering transfer speeds of up to 12Gb/s.

The system will support a maximum of two PCIe 3.0 expansion slots with one CPUs installed. With two CPUs installed, a third PCIe slot is active. There are also several options for the primary riser to support different cards and including a GPU riser, a SATA M.2 riser, an NVMe riser, and a secondary riser that supports three PCIe slots and is the only one that requires two processors. There are five USB 3.0 ports total, which is standard on all chassis with one in front, two in the back, and two internal.

Both remote and local management of the system is provided by HPE’s integrated Lights Out Standard (iLO) with intelligent provisioning. For more functionality, you can also upgrade iLO to an Advanced or Advanced Premium Security Edition with the purchase of a license.

The HPE ProLiant DL160 Gen10 server delivers the performance for SMBs with help from Intel’s Xeon Scalable processors. Supporting generous storage up front and up to 256GB of memory, this server is perfect for standard business applications, mid-level virtualization or for use as a web server.

Memory speeds of 2133MT/s or 2400Mhz depending on processors