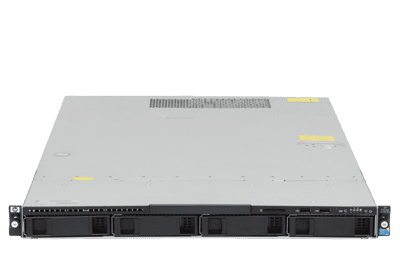 The HPE ProLiant DL160 Gen6 server delivers high-performance computing capabilities in a compact 1U chassis. Built around Intel’s 5520 chipset, this dual-processor system can support up to eighteen DIMMs, eight hard drives, and two expansion slots. Intel’s Quick Path Technology doubles throughput with a high-speed interconnect between the processor and the system’s peripherals. Performance is enhanced and power wastage is prevented with the system’s Smart Sensors that intelligently allocate the system’s power usage when power is being used inefficiently.

This system is powered by Intel’s 5520 chipset and supports up to two six-core Intel Xeon 5600 processors or two quad-core Xeon 5000 processors. Intel’s 5520 chipset replaced front-side bus (FSB) architecture for Intel’s Quick Path Interconnect technology, which allows the CPU to directly access the system’s RAM to improve transaction time. Depending on the need for cores, storage, or both, Administrators can choose from CPUs with four or six cores. Many of the processor models support Intel’s Hyper-Threading technology which increases processor throughput by allowing multiple threads to run on each core.

With a dual-processor configuration, this system can support up to 18 DIMMs of registered (RDIMM) or unbuffered (UDIMM) DDR3 memory modules. Using 16GB RDIMM memory modules in all 18 slots will provide a maximum memory capacity of 288GB.

The HPE DL160 Gen6 can be configured to support either 4 SFF, 4 LFF, or 8 SFF drive bays. Both the four-bay and eight- bay configurations have room for an optional optical drive. A maximum internal storage of 12TB is achieved using four 3TB LFF SATA drives. HPE’s Smart Array P410 RAID controller can be upgraded to include a 512MB Battery-Backed Write Cache (BBWC) or Flash-Backed Write Cache (FBWC), or 1GB FBWC. 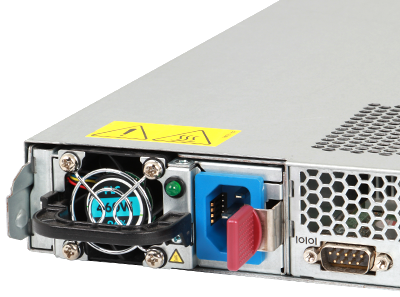 Two expansion slots are provided on the DL160 Gen6 server. The first slot supports PCIe Gen2 technology and can be configured as either a full-length/full-height or half-length/full-height slot. A second expansion slot, with a low profile form factor, is provided in both the hot plug and no-hot plug models but on the hot plug model it is occupied by the SmartArray P410 controller. This system provides five USB ports with one internal and the remaining four split evenly between the front and the back of the chassis.

HPE’s LO100 allows access to the systems management features, out-of-band, without an operating system installed. LO100 can be accessed through the server’s serial port or through a dedicated Ethernet port. Many of the server’s features can be controlled remotely, including the system’s power, server reboots, fan speed, and power state. Advanced licenses for Virtual KVM and Virtual Media capabilities are available. Virtual KVM uses a virtual desktop to provide full control of the mouse, keyboard, and display of the host server. Virtual Media allows media devices to be shared, removed, or added. HPE replaced their SmartStart tools with new setup and deployment tools for a simplified approach to adding operating systems to the system’s hardware.

The HPE ProLiant DL160 Gen6 server supports two processors, 288GB of memory, 12TB of storage, two expansion slots, and five USB ports. This system is easy to deploy with HPE’s LO100 management software. Server upgrades are stress-free with the system’s easy-access chassis. Remote management capabilities have also been significantly improved to save system Administrators time. The system is an ideal solution for a variety of applications, including high performance computing environments, SMBs, and enterprise scale-out deployments.