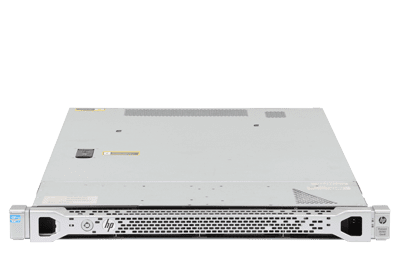 The HPE ProLiant DL160 Gen8 server can support up to two processors from Intel’s E5-2600 processor series for a maximum memory capacity of 768GB and a maximum internal storage capacity of 16TB. HPE’s iLO Management Engine includes a multitude of management tools embedded onto the system itself and can be accessed from a single screen to simplify server management. The system has two PCIe expansion slots available and can support an optional DVD-ROM/RW optical drive if desired. Tool-less access to most of the components and flat cabling throughout the system make it easy to upgrade and service.

With a two processor configuration, the HPE DL160 Gen8 system can support up to 24 DDR3 DIMM slots, or half that amount with a single processor. This system supports load reduced (LRDIMM), unbuffered (UDIMM), and registered (RDIMM) memory modules, but each are distinct memory technologies that cannot be mixed within the system. Using 24 x 32GB LRDIMM memory modules, the system can support a maximum memory capacity of 768GB. Depending on the configuration, memory can run at speeds of 1066MHz, 1333MHz, or 1600MHz. HPE introduced their SmartMemory modules with Gen8 servers reducing power consumption by 20%.

Management of the server is been made easy with HPE’s iLO Management Engine, which includes an intelligent microprocessor, a dedicated network interface, and secure memory to manage the server throughout its entire lifecycle. HPE’s iLO Remote Console allows users to remotely control the power state and collaborate with up to six server administrators. HPE’s Active Health System which monitors and records each change to the server’s hardware and can display the complete configuration history. Server deployment and setup has been simplified with embedded deployment capabilities so SmartSmart CDs and Smart Update Firmware DVDs are no longer needed.

The HPE ProLiant DL160 Gen8 server delivers high-performance capabilities, with a user-inspired design and suite of embedded management technologies. HPE’s SmartDrive carriers provide an icon-based approach to drive operations so administrators no longer need to interpret multiple combinations of blinking lights. Data loss and downtime are reduced with HPE’s SmartMemory, and SmartArray HP controllers provides up to six times the performance of previous generations. Air flow throughout the system is greatly improved and HPE’s 3D Array of temperature sensors throughout the chassis help keep the system cool automatically.