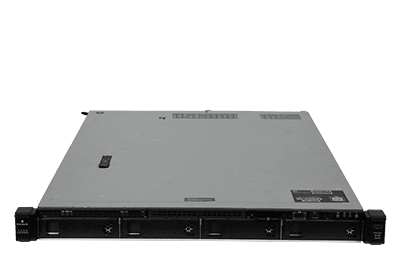 AMDs EPYC processor line supports more cores at a lower thermal design point (TDP) than comparable Intel Xeon processors. In fact, there really isn’t a comparable Intel Xeon Scalable processor because Intel processors designed for single-socket deployments only support 768GB of memory, while AMD supports up to 2TB! With more cores per processor you can also save on virtualization licensing since some vendors use a per-CPU core licensing model. The HPE ProLiant DL325 Gen10 Server delivers much of the same performance as a similarly outfitted two-processor intel Xeon Scalable platform at a significantly lower price point when fully outfitted.

There are various storage options to choose from including, four 3.5-inch drives plus configurations that include eight to ten 2.5-inch drives. With eight drives installed, there’s still room for an optical drive with status and health panel. Another of those storage options include up to 10 NVMe drives with the motherboard supporting five embedded dual-port PCIe NVMe connectors. NVME drives deliver low-latency and are ideal for software-defined storage and high-performance applications. The NVMe drive option will require a specific backplane. Performance 12Gb/s controllers like the P408i-a SR, P408i-a SR, and the brand new P816i-SR require the Smart Storage Battery for enhanced resiliency. For boot and hypervisor support you also have other options like an integrated Micro SD card slots, and internal USB 3.0 port, and support for mirrored M.2 drives on a half-height, half-length PCIe card.

The primary riser supports two PCIe slots, a x16 and a x8. A secondary riser supports an additional 6 PCIe card. All slots are PCIe 3.0. However, if you will be installing a Smart Array option to address 12Gbs data transfer needs, then the second riser option is not available.

HPE has a number of security features built right into the silicon with security protections that begin in the factory and continue for the life of the server. Management of the HPE DL325 Gen10 Server is through HPE’s Integrated Lights Out (iLO) 5.0 with Intelligent Provisioning providing local and remote access through a standard browser. ILO also benefits from HPE’s silicon root of trust with an Advanced Premium Security Edition, which verifies millions of lines of code before even booting the system. If an error is detected, the system will revert to the last know good state or return to factory settings. The system comes with a Standard license but the Advanced HPE iLO and the Advanced Premium Security Edition will require a premium license.

With just a single AMD EPYC processor the 1U HPE ProLiant DL325 Gen10 server can deliver comparable performance and dense virtualization compared to a dual processor Intel Xeon-based 2U platform. AMD processors also have a top thermal design point (TDP) of 180W for the single processor, while intel Xeons can have a TDP of up to 205W. With just the single processor, clearly, you’ll also save on power, licensing costs, and space in a datacenter environment.