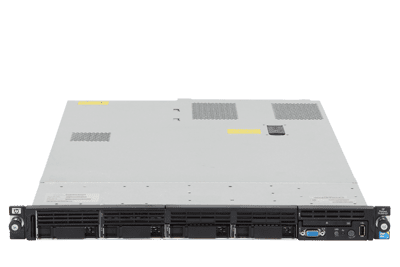 A maximum of two Intel Xeon 5500 or Xeon 5600 series four or six core processors are supported on this rack server. High performance processors are denoted with an ‘X’, but administrators can opt for lower wattage ‘E’-class or ‘L’ rated processors for lower cost. Xeon 5500s can be installed on the system, if preferred, to further lower the system’s overall cost.

Registered (RDIMM) or unbuffered (UDIMM) DDR3 memory modules are supported on the HPE DL360 Gen7, but mixing of different memory types is not supported. Each processor socket contains three memory channels that support three DIMMs each for a total of nine DIMM slots per installed processor, or a total of eighteen DIMMs with dual processors. With twelve 32GB RDIMM memory modules, the system can support a maximum memory capacity of 384GB. When using 16GB or 32GB memory modules, only twelve DIMM slots will be supported and both processors must be installed.

Administrators can choose between a 4 SFF or 8 SFF hot-plug drive bay configuration. Large form factor drives are not supported. If desired, an optional optical drive can be added to the 4 SFF configuration only. A maximum internal storage of 9.6TB is supported when using eight 1.2TB SAS hot plug drives in all eight slots. 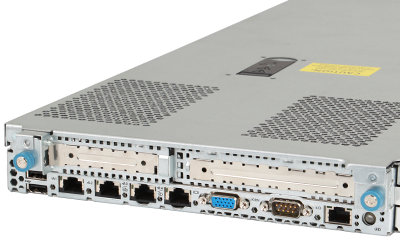 A total of two expansion slots are supported—one full-size PCIe adapter and one low-profile card. An optional riser kit can be purchased to support a PCI-X card in the second expansion slot. This system is equipped with twice the amount of networking ports than previous generations with four 1GbE ports.

Proper cooling is maintained with HPE’s iLO3 software which monitors server temperature and sends corrective signals to the fans. iLO3 software automatically monitors hardware statuse and runs off its own dedicated processor, memory, and network interface. With an upgraded management package, users can monitor and graph power consumption and cap the amount of energy used to run the system. Local troubleshooting has been improved with a small slide-out diagnostic panel on the front of the server.

The HPE ProLiant DL360 Gen7 server delivers high-performance computing capabilities in a small 1U chassis. Intel’s 5500 series and 5600 series processors offer a variety of performance options with processor speeds ranging from 1.60GHz up to 3.46GHz. This system supports up to 18 DIMM slots with both processors installed, but when using 16GB or 32GB memory modules only a maximum of 12 DIMM slots can be populated. HPE’s iLO3 controller offers faster remote control performance and improved virtualization capabilities than its iLO2 predecessor.

Fan redundancy standard with all modules