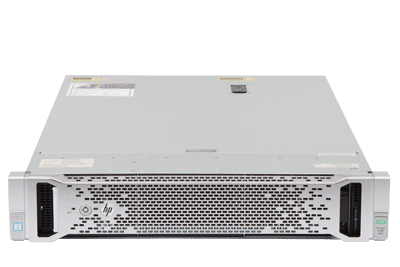 The HPE ProLiant DL380 Gen9 rack server just happens to be one of HPE’s best-selling servers, and as HP put it the “datacenter standard”. This server supports the latest technology and excels at common business solutions and mission critical applications. New technologies include 25GbE, and support for HPE’s Persistent Memory. HPE’s NVDIMMs are optimized for the ProLiant series servers and offer enhanced performance for databases and analytic workloads.

The ProLiant DL380 Gen9 supports up to 24 HPE DDR4 SmartMemory modules. Outfitted with 128GB of DDR4 LRDIMM modules in all 24 slots adds up to an impressive 3TB of memory! Using HPE SmartMemory, Administrators can expect an increase in performance of 21% over non-HP vetted memory modules. The DL380 G9 is also one of the first ProLiant servers to support HPE Persistent Memory offering performance and data resiliency, but significantly less memory at 128GB using 8GB modules in 16 slots. Registered DIMMs are also supported but will only provide up to 768GB using 32GB modules. Memory speeds of 2400MHz are supported but must be paired with a compatible v4 processor.

The DL380 Gen9 supports up to six PCie 3.0 Expansion slots in a dual processor configuration and can be used for additional NICs, controller cards, or a double-wide GPU for workload acceleration.

The HPE DL380 Gen9 features embedded management handled by HPE’s integrated LightsOut (iLO) Management, is standard and offers administrators service alerting, reporting, and remote management. Also included as a standard feature, is Intelligent Provisioning to simplify server deployment and provide flexibility. System configuration is addressed with an easy to use wizard and is available on all Gen9 platforms and supported by all operating systems. HPE Insight Online offers a personalized dashboard for health monitoring and support of converged infrastructures.

HPE says this is the world’s best-selling server, and with the performance, agility, and resilience demonstrated by the DL380 Gen9 server, we’re inclined to believe them. The latest Intel Xeon processors, NVDIMM options, and a new Universal Media Bay Configuration with rear drive support give administrators options when configuring this highly scalable server. This server is a jack-of-all-trades and can run anything from the most basic to mission critical applications.