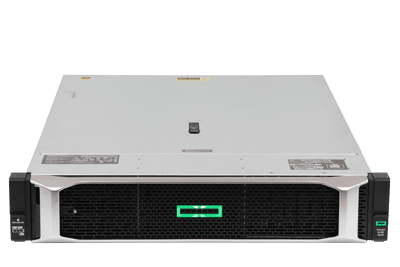 HPE’s ProLiant DL385 Gen10 server with AMD EPYC processors features enhanced security with HPE’s Silicon Root of Trust and AMD’s System on a Chip architecture. The EPYC processors only allow validated firmware to run. Other integrated security features provide encryption for both memory, VMs, and the hypervisor. HPE says this system can also help you realize a 50% lower cost per virtual machine compared to a traditional server solution.

The system will support one or two AMD EPYC 7000 series processors with 8 to 32 cores each. L3 cache has also been enhanced with 32MB to 64MB depending on your choice of processors. The EPYC processors also deliver more PCIe lanes and more memory channels.

Each AMD EPYC processor supports eight memory channels compared to just six channels on Intel Xeon Scalable processors. The HPE DL385 Gen10 has 32 memory slots total with each processor controlling 16 memory slots, with two modules per channel. Memory speeds include 2133MHz, 2400MHz, and 2666MHz but must be paired with an appropriate processor that supports that speed. With all memory channels loaded with 128GB DDR4 HPE Smart Memory modules, the system can support up to 4TB. NVDIMMs are not supported.

There are a multitude of storage options for this chassis that include support for SAS and SATA HDDs and SSDs and support for up to 24 NVMe drives. Standard up-front drive configurations include an 8-Bay SFF, 16-bay SFF, and 24-bay SFF. There’s also a 12-bay LFF, and 8-bay LFF chassis. All of these configurations can be augmented with the addition of a midplane storage tray, which houses four more LFF or SFF drives. Four different rear drive cages supporting LFF or SFF HDD, SSD or NVMe drives can be installed in the primary, secondary, and tertiary risers. There are two dedicated slots on the motherboard for two full-size M.2 storage devices. Optional Universal media bays can also support two additional SFF SSDs, HDDs or NVMe drives. Up to 24 NVMe drives can be installed on the system using the premium drive cage with PCIe enablement kit and special risers. This last configuration, and many of the others, will require a high-performance fan kit.

Management of the system is provided by HPE’s integrated Lights Out Standard with Intelligent provisioning. OneView Standard is also available free from Dell as a download and offers more intuitive infrastructure management and automation. Both can be upgraded to provide even more management tool options.