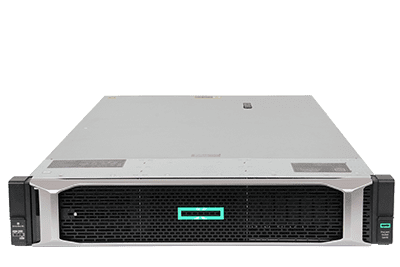 When outfitted with up to 6TB of memory the HPE ProLiant DL560 Gen10 server is also a great platform for memory-intensive applications like SAP HANA. Additional applications include, virtualization, business-critical workloads, server consolidation, business processing and general 4-socket applications.

Two or four Intel Xeon Scalable processors from the Bronze, Silver, Gold, or Platinum families can be installed in this system. Two processors are housed on the main system board, while the third and fourth processors plus their associated memory slots reside on a CPU mezzanine board that clamps down over processors one and two. Each Scalable processor supports six memory channels, which is two more memory channels than the previous generation Intel Xeon E5-2600 V4 processors. However, only certain processors (with suffix “M”) support 1.5TB of memory each, with most of the family supporting only 768GB. Many of the high-end Scalable processors also provide up to three Ultra-Path Interconnect channels (UPI) for improved CPU communication in a four-processor configuration.

The HPE DL560 Gen10 server supports drive configurations of 8, 16 and a maximum of 24 x 2.5-inch drives housed in three separate up-front drive cages. Supported drive types include SAS, SATA and NVMe HDD and SSD storage devices. Only 12 NVMe drives can be installed but will require additional specific PCIe risers or a discrete Smart Array HD/RAID controller. The integrated SATA controller can RAID up to 10 storage devices. Using 24 x 15.3TB SATA SSDs will provide a top capacity of 367TB of storage.

Each processor supports 12 memory slots with two memory modules per memory channel for a total of 48 memory slots with all four processors installed. Only DDR4 Registered (RDIMM), Load-Reduced (LRDIMM), and Non-Volatile (NVDIMM) memory modules are supported in varying capacities depending on your choice. LRDIMMs providing the highest potential capacity at up to 6TB with a two-processor configuration and all slots loaded with 128GB modules and can operate at up to 2666 MT/s. 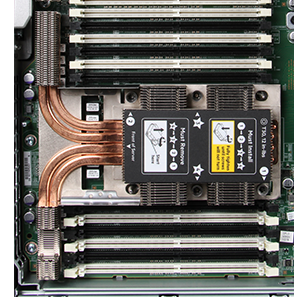 Eight PCIe slots are supported using three separate risers, a Primary, secondary, and tertiary. Additionally, an optional 4-port NVMe Mezzanine card supports up to eight NVMe drives, does not take up any of the PCIe slots, and resides on the CPU Mezzanine Board that supports processors 3 and 4. PCIe risers can be used to support a number of Gen10 Smart Array HD/RAID controllers, additional network cards for enhanced I/O, and to support NVMe drives up front. If installing a Tertiary riser only two PSUs are supported as there is not room for the riser with four PSUs. A Flexible Lan on Motherboard (LOM) provides other options to enhance network capabilities with a choice of 1 Gb, 10 Gb, 25 Gb or 10 Gb base-T Ethernet or converged networking. The system also features integrated graphics.

HPE Integrated lights Out (iLO) Standard with intelligent Provisioning is embedded for local and remote monitoring of the system. HPE iLO Advanced Premium security Edition provides even more functionality. HPE OneView Standard is available for download and simplifies management for automation across servers, storage, and networking—and across generations of HPE servers. OneView Advanced supports software-defined functionality not present on the Standard version.

Perfect for Mission Critical workloads, the HPE ProLiant DL580 Gen10 server delivers incredible performance with up to four Intel Xeon Scalable processors in a 2U space! With support for up to 6TB of memory, this system is also a great option for in-memory database applications and other mission critical workloads.