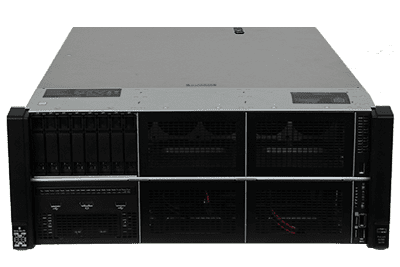 With a 4U chassis, the HPE ProLiant DL580 Gen10 has plenty of space for up to 48 drives up front. With four processors the system will support up to 6TB of memory. Scalable processors also provide support for up to 16 PCIe slots that can be used for enhanced network communications, HD controllers, and up to four GPU accelerators.

You can install two or four Intel Xeon Scalable processors from the Gold and Platinum families. In fact, this system is designed for both dual and quad-processor configurations. If features a separate CPU mezzanine board that supports two additional processors, 24 memory module slots, and once installed it will activate more PCIe lanes. To take advantage of the full memory capacity of 6TB offered on this platform, you will need Scalable processors with an “M” suffix as those are the only processors that support 1.5TB each. Those CPUs without the “M” after the model number only support a maximum of 768GB. Most of the supported processors have three Ultra Path Interconnects per CPU which enables faster inter-CPU communications in a four-processor configuration. Intel Xeon Scalable processors also support six memory channels for significantly improved throughput.

Storage on this system is 4.7 times greater than that provided on the previous generation DL580 Gen9, which only supported 10 drives up front. The Gen10 version has up front support for up to 48 x 2.5-inch SAS or SATA drives and can support up to 20 NVMe U.2 storage devices as well. Drives types can also be intermixed to support a variety of different workloads. The system has integrated RAID support for up to 10x SATA drives but to support other drive types you will need to install an optional SmartArray HD/RAID controller. The optional Gen10 RAID controllers also support an optional battery to power NVMe drives, and NVDIMMs, in the event of a power failure.

Each processor is in charge of 12 memory module slots with two memory module slots per memory channel. With four processors, that’s 48 memory slots total, or half that with a two-processor configuration. You can choose from Registered (RDIMM), load-reduced (LRDIMM), or non-volatile NVDIMM modules operating at speeds of up to 2666MHz. To support the full 6TB of memory requires four processors paired with 128GB LRDIMMs in all slots, and a processor with the “M” suffix. RDIMM modules will provide half that capacity in a four-processor configuration, at up to 3TB using 64GB registered memory modules. NVDIMMs will provide a maximum of 384GB of non-volatile memory but must be paired with RDIMMs in varying quantities depending on you desired workload. Refer to the Population Rules for DIMMs in HPE Gen 10 Server with Intel Xeon Scalable Processors Technical White Paper for specific configurations using RDIMMs, LRDIMMs, and NVDIMMs. 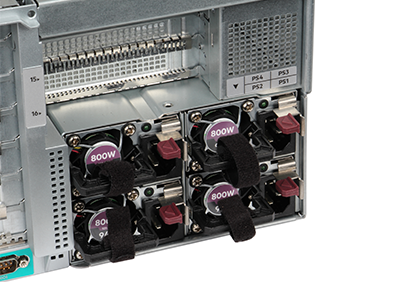 Integrated Lights Out 5.0 and HPE’s OneView composable software provide management of the system. OneView is part of HPE’s Composable strategy that allows the configuration and reconfiguration of server assets to deliver resources where they are most needed, quickly. HPE’s “Silicon Root of Trust” initiative has also implemented several other security features to protect your data.