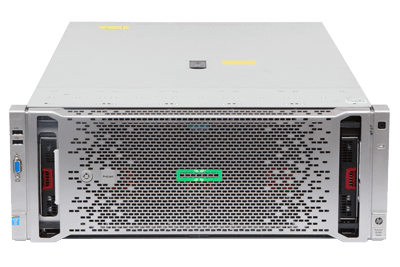 With a four processor configuration, the DL580 Gen8 can provide a maximum memory capacity of 6TB using all 96 DDR3 DIMM slots outfitted with 64GB memory modules. There are two memory controllers in each processor, each of which support four memory channels, with up to three memory modules per channel. Each processor supports two of the eight easily removable memory cartridges, each of which supports 12 memory modules. Registered (RDIMM) and load-reduced (LRDIMM) memory modules can be installed, but mixing different types of memory modules is not supported. Memory speeds of 1600MHz, 1333MHz, or 1066MHz, are supported but keep in mind, memory speed is dependent on the processor model, memory speed, and memory configuration. Users can choose between running the system in independent channel mode or combined channel mode (lockstep) for improved system reliability and availability. 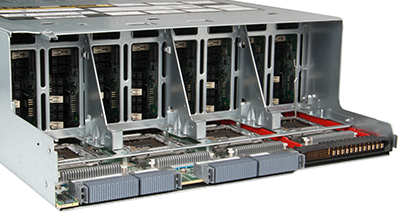 With all of the management tools laid out on a single screen, management of the this system is significantly easier than HPE’s Gen7 models. Initial server setup is streamlined with Intelligent Provisioning, an embedded solution that provides system configuration through an easy-to-use wizard. New to Gen8 servers, stand-up PCIe cards can be effectively monitored with HPE’s 3D Sea of Sensors. Agentless Management allows for users to manage alerts and monitor the server hardware without OS-based agents to further simplify server monitoring.

The HPE ProLiant DL580 Gen8 server is easy to manage and supports a great deal of memory with extensive expansion options. The system’s design allows for easy processor upgrades with a CPU drawer that slides out of the unit without requiring the chassis itself to be removed from the rack. With the system’s high memory capacity and Intel’s E7-4800/8800 v2 processors, this system is able to support multiple heavy workloads simultaneously and can be used as a virtualization platform with VMware or other HPE certified software.