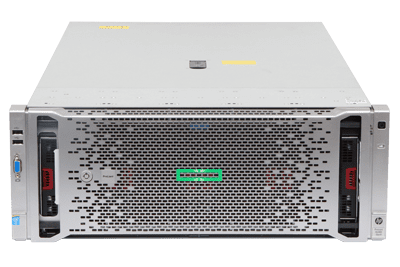 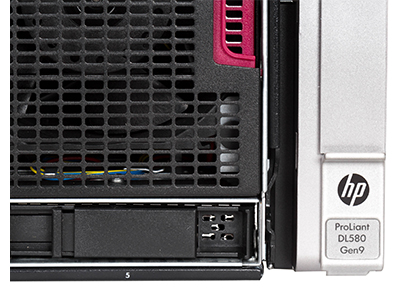 Featuring uncompromising reliability, the DL580 is a powerhouse with resiliency your business can depend on. Intel’s Xeon E7-4800/8800 v3 processors support up to 6 Terabytes of memory, nine expansion slots for greater bandwidth, and 12GB/s SAS storage controllers. This system offers very high resiliency for mission critical enterprise, business intelligence, and database applications. 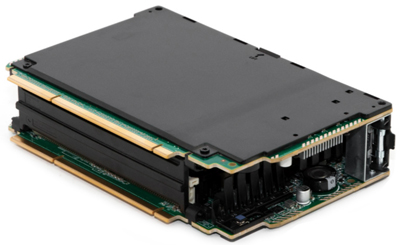 Each processor supports two memory cartridges with 12 DIMM slots each for 24 total—with all four processors that’s 96 memory module slots. Quad-rank LRDIMM modules or RDIMM modules are supported but cannot be mixed. Enhanced performance and functionality is activated when HPE SmartMemory is used. To enable all 96 memory slots, and up to 6TB of memory, requires four processors. Transfer speeds are dependent on both the processors stated speed and that of the memory modules and will default to the slowest performer between the two.

There are several storage combinations to choose from, including one that stores up to 38.4TB of data using 10 SFF SATA SSDs. Up to five NVMe drives are also supported in the Express Bay for up to 8TB of super-fast of storage.

Nine PCIe sockets are enabled in a four processor configuration and will support a multitude of external devices and or additional NICs and HD Controllers. The system also supports 25Gigabit Ethernet, which is 2.5 times faster than 10GbEand can easily scale to 100GbE using multiple cards. InfiniBand adapters are also supported for increased bandwidth.

OneView provides automation simplicity across servers, storage, and networking. iLO is an embedded management feature that can access the system out of band and can help with firmware and driver updates using the SmartUdate feature. iLO Management, Intelligent Provisioning, and HP OneView Advanced are all standard on this system. Optional iLO Advanced is available with the purchase of a license.

The HPE ProLiant DL580 Gen9 rack server is a workhorse system for databases, big data analytics, large-scale virtualization, and handling large numbers of users and transactions. For Data Center applications, where space is an issue and cost is calculated over the long-term, the new technologies offer reduced power consumption with advanced fault management and diagnostics increasing reliability and mitigating initial purchase cost.