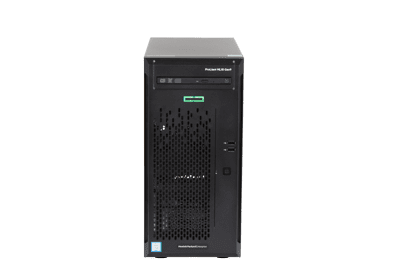 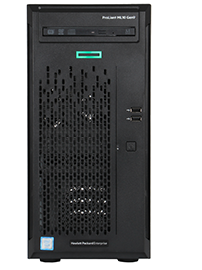 The HPE ProLiant ML10 Gen9 server is an entry-level platform from HPE’s mini tower series. Designed to alleviate issues in SMB markets like data and intellectual property theft, this server is an affordable, simple, and secure solution. This server is extremely customizable with three different processor models to choose from including high-performance Xeon processors. For VDI applications, this server supports up to two single-wide and one double-wide GPU cards. Providing server-level performance without the noise levels, makes this the perfect addition for a growing small business or home office solution.

Powered by Intel’s Skylake generation processors, System Administrators have their choice of either budget-friendly Intel Pentium, Intel Core i3, or high-performance Intel Xeon E3-1200 v5 processors. Xeon quad-core processors provide up to 8MB of Level 3 cache, whereas dual-core Pentium and Core i3 processors will only support 3MB of cache. An embedded Intel Active Management Module is enabled with the addition of a Xeon processor providing remote maintenance and wireless management capabilities. Although Pentium and Core-i processor configurations do not support Intel’s AMT features, they will support Intel’s Standard Manageability which enables remote access but does not have support for KVM functions.

Up to four DDR4 unbuffered (UDIMM) memory modules can be installed for a maximum memory capacity of 64GB. DDR4 memory modules provide a 50% increase in performance, support higher DIMM capacities, minimize power consumption, and improve data integrity. Memory speeds can reach up to 2133MHz, but this capability is dependent on the memory and processor model chosen.

A maximum of six large-form factor (LFF) SATA drive bays provide up to 24TB of storage HPE ML10 Gen9. All drives are cold-swap so this server must be powered down before installing, repairing, or upgrading hard drives. For added storage, HPE’s screw kit will support a fifth drive and a drive enablement kit will support a sixth drive. If desired, you can configure this system with a DVD-ROM or DVD RW optical disk drive. Adding HPE’s optional H241 Smart Host Bus Adapter provides further system flexibility and allows system admins to run the server in simple RAID mode or HBA mode. Simple RAID mode supports RAID levels 0, 1, and 5 and provides optional secure encryption capabilities. 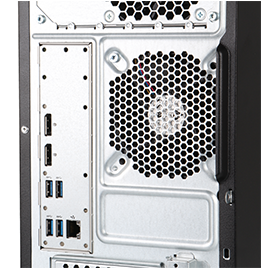 There are four PCIe 3.0 slots, all of which support a full-height/half-length form factor. These are x4, x4, x16, and x8 physical slots. To add to the server’s security, the expansion slot area can only be accessed by removing the top screw from the inside. The front of the system has two USB 2.0 ports and a power button. Located on the back of the chassis are four USB 3.0 ports, an Ethernet port, and two display connectors.

The HPE ProLiant ML10 Gen9 server provides server-level performance without the noise, cost, or complexity. Designed to alleviate issues commonly found in SMB markets, such as network access and control, this single-socket tower server supports up to 64GB of memory and 24TB of storage. The flexibility of the system allows businesses to choose between three different processor models, and between four to six drive bays. Security features include Intel’s Secure Erase for system deployment, optional secure encryption capabilities, and a Kensington Slot to prevent theft. With small businesses in mind, HPE kept system management simple and easy to use, while including server-level capabilities such as remote system management.

Up to 6LFF Drive