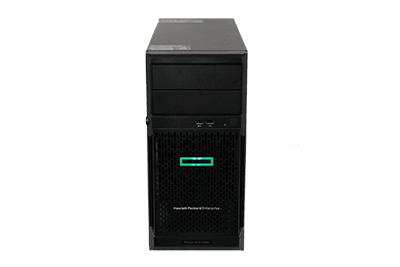 The HPE ProLiant ML30 Gen10 server tower is an enterprise-class appliance that provides reliability and expandability for smaller businesses. It’s also and excellent choice for an on-premise hybrid cloud solution. There are a few different chassis configurations including 4x 3.5-inch drives or 8x 2.5-inch drives both of which support a single processor. 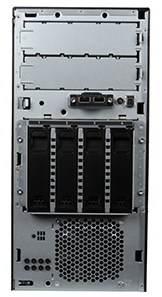 You can choose from three different processor families. The system will support a single Intel Xeon E-2100 processor with four to six cores or a Core i3-8300 with four cores or a Pentium G5400 with two cores. Those last two only support memory speeds of 2400MT/s while the Xeon E-2100 will support memory speeds of up to 2666MT/s. the system is powered by either a 350W or 500W PSU with an extra slot for a redundant PSU.

Memory speed will be dependent on the processor with the E-2100 providing the fastest memory speeds. Only DDR4 Unbuffered (UDIMM)memory modules are supported. Maximum memory capacity is using one 16GB memory module in each of the four slots for a total of 64GB. 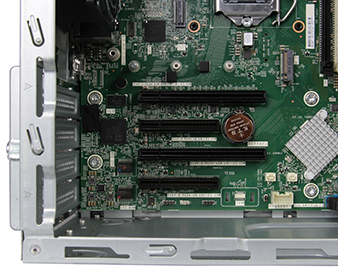 The chassis features an embedded 2-port 1Gb Ethernet 332i Adapter but you can also install a PCIe card with a single 10Gb/s port using one of the four PCIe 3.0 ports. Only PCIe slot #1 supports a full length x16 slot along with a x16 Bus width.

Integrated Lights Out (iLO) provides access to the server for health monitoring and management features, which include Active Health Systems and intelligent provisioning. HPE OneView can also be used for inventory, health monitoring, and alerting across multiple generations of HPE servers.

The HPE ProLiant ML30 Gen10 server tower is a great option for remote or branch offices offering a secure and reliable enterprise platform. You get a range of single processor options from three separate intel processor families and up to 64GB of unbuffered memory. With a storage capacity of up to 61TB this platform is also an ideal data storage solution.