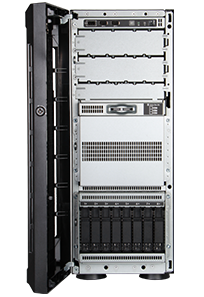 The HPE ProLiant ML350 Gen10 leverages the new scalable processors to deliver a 71%increase in performance and a 27% boost in core counts. This is a very flexible platform that can also support up to four double-wide GPUs for a dense Virtual Desktop infrastructure or to support graphics-intensive workloads. An optional storage cage also supports up to eight NVMe solid state drives for increased performance and resiliency. This tower server can also be rack mounted with an optional tower to rack conversion kit that support both this server and the HPE ProLiant ML110 Gen10

You can install one or two Intel Scalable processors from either Bronze, Silver, Gold, or Platinum families with up to 28 cores. Each processor supports up to six memory lanes but to support the full memory capacity of 3TB will require a Scalable processor with an “M” designation that are designed to support up to 1.5TB of memory each. Processors without the “M” only support up to 768GB each. Turbo Boost and Intel Hyper-Threading may not be available on certain processor models. Power is provided by either a 500W, 800W or 1600W flex slot hot plug power supply in redundant or non-redundant configurations.

Storage on the HPE ML350 Gen10 platform is generous with support for up to 24 x 2.5-inch SAS, SATA SSDs HDDs and up to eight SFF NVMe PCIe drives. The 2.5-inch chassis configuration supports a default drive cage on the lower portion of the chassis that supports 8x 2.5-inch drive bays. Two additional drive cages each of which can support eight 2.5-inch drives can also be installed bringing the total to 24 2.5-inch drive bays. NVMe drives are only supported on the 2.5-inch chassis and must be installed in the center-mounted optional Express Bay drive cage. An NVMe kit has two x4 Direct Attached PCIe NVMe riser boards each of which can support four drives or a total of eight with both risers installed. There is also a 3.5-inch drive bay chassis configuration that supports up to 12 front-mounted drive bays, total. The chassis configurations for the 3.5-inch chassis is very similar with three separate drive cages each of which can support four 3.5-inch drives for a total of 12. Each configuration has a control panel at the top with system health, NIC status, two USB 3.0 ports and a dedicated iLO service port. A front bezel with security lock is standard equipment on this system. There is also a single MicroSD card slot located adjacent to PCIe slots 5-8 below the power supply. Managing the hard drives is either the integrated HPE Smart Array S100i SR Gen10 SW RAID. M.2 drives are supported by a universal enablement card kit and is limited to PCIe slots 1-4 and supports only one enablement kit total. M.2 supports software RAID only. Some of these configurations may require a redundant fan kit.

Eight PCIe 3.0 slots provide connections for a number of devices to support your workload. PCIe slots 1-4 located in the lower back of the chassis are supported by CPU 1, and optional GPUs can be installed in slots 1 and 3. PCI slots 5-8 are active with the addition of a second processor with slots 5 and 7 supporting optional GPUs. You can install up to four double-width GPUs like the Nvidia P4000, P6000 and Tesla P40 but only two Nvidia Tesla M10 quad GPU modules. There is an embedded four port 1GbE on the back of the system but you have a lot of choices for network communications with 1GbE, 10GbE, 10/25GbE, and 100GbE QSFP. The same goes for Smart Array HD/RAID controllers—lots of choices.

Management of the system is made easy with HPE’s suite of management tools including HPE integrated Lights Out (iLO) Advanced for out-of-band management of the system. HPE OneView helps with even more management tools for converged infrastructures. Security on all of the Gen10 servers has also been updated with Runtime Firmware Validation, which is part of the iLO Advanced Premium Security Edition. Secure recovery allows you to roll back the firmware to the last known version that was not compromised.

The HPE ProLiant ML350 server tower is an excellent addition to any size business, either in the front office, branch office or rack mounted in your server room once your startup business has outgrown its confines. The ML350 Gen10 packs in the performance with support for up to two 28-core top of the line processors, up to 3TB of memory, and a maximum storage capacity of up to 184TB using SFF drives.