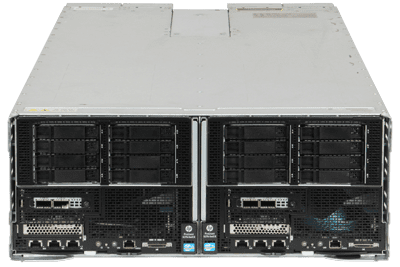 Several compute nodes are supported on the HPE ProLiant s6500 chassis. Depending on your choice of server blade the HPE s6500 chassis will support eight half-width, four full-width server nodes or just two of the half-width 4U server nodes—which can be intermixed. All server nodes can be configured and serviced independently, and are side-specific with a left and right hand server node options. Power supplies are available in redundant configurations with four PSUs installed. Hot plug fans are also available, and management functions are also shared for reduced operational costs.

The HPE s6500 chassis can support Full-width, half-width 1U, 2U, and 4U options include:

The HPE ProLiant SL390s Gen7 server node is designed for compute density and comes in three different server form factors that all use the same system board with two Intel 5600 processors and 12 DDR3 DIMM slots. Form factors include a 1U half-width server tray designed for compute density, a half-width 2U and 4U version for high-performance computing with support for up to three 225W GPUs in the 2U version, and eight 225W GPUs in the 4U version. 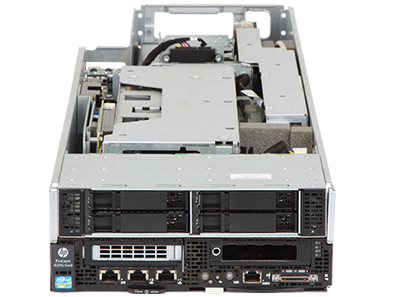 The HPE ProLiant SL230s Gen8 server node is a half-width compute node designed for high-performance and scale-out applications. It supports two Intel Xeon E5-2600 processors and up to 16 DDR3 DIMM slots. The s6500 chassis will support up to eight of these server nodes for up to 16 processors in a 4U space.

The half-width, 2U HPE ProLiant SL250s Gen8 server node again for scale-out and performance applications. This is a half-width, 2U modular form factor that can support either three GPUs or four internal 2.5-inch drives in place of the GPUs. The system board supports dual Intel Xeon E5-2600 or E5-2600v2 processors and up to 16 DDR3 memory modules.

The HPE ProLiant s6500 Chassis is extremely flexible and an excellent choice for data center and cloud applications that require rapid scale-out. Administrators have many options with the supported compute nodes and can mix and match blades and operating systems to support their desired workload.

NOTE: mixing and matching of fans is not supported