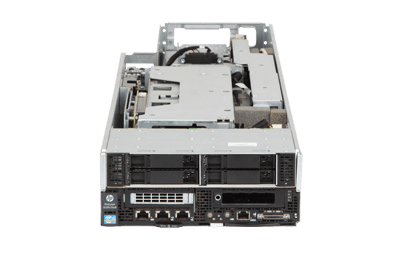 The HPE ProLiant SL250s Gen8 server is designed for deployment in HPE’s s6500 scalable system chassis. Up to four of these half-width, 2U server nodes can be installed in the HPE s6500 chassis. Each server node can support up to three GPUs, or four additional small-form factor hard drives. System Administrators have their choice between Xeon E5-2600 processors, or next generation E5-2600 v2 processors.

In a two-processor configuration, this server will support up to 16 DDR3 memory modules running at speeds of up to 1866MHz. Registered (RDIMM), unbuffered (UDIMM), and load-reduced (LRDIMM) memory modules are supported, but mixing the different types of memory within a single server is not. For the fastest system performance and to reach the system’s max memory footprint of 512GB requires 16 x 32GB LRDIMM modules. Specifically designed for ProLiant servers, HPE’s SmartMemory unlocks advanced memory features to take full advantage of the performance, dependability, and power savings this server has to offer.

The front of the HPE SL250s Gen8 supports four small form factor (SFF) drive bays, all of which are hot-swappable for easy repairs or upgrades. To reach the maximum server capacity of 4.8TB, this system needs to be configured with four 1.2TB drives. Businesses that require additional storage can replace the three GPUs and add another four SFF bays with a hard drive kit. Keep in mind when ordering a Smart Array HD controller that certain models are not compatible with v2 E5-2600 processors and will only work with v1 processors

Up to four 2U, half-width SL250s server nodes can be installed into HPE’s s6500 system. For expansion, this system has one PCIe slot that is easily accessible from the front panel. HPE’s proprietary FlexibleLOM slot also sits at the front panel to provide a flexible networking solution and is integrated onto the system board. Businesses have their choice of three different FlexibleLOM connections: 1Gb, 10Gb, or InfiniBand. When using the system with three GPU accelerators installed, you will need at least three HPE 1500W hot-plug power supplies.

HPE’s iLO 4 is embedded on the system board to monitor server health and provide remote system management capabilities. SmartStart CDs and Smart Update Firmware DVDs are no longer necessary and have been replaced by HPE’s Intelligent Provisioning to simplify server deployment and configuration. iLO also monitors the server’s temperatures and automatically adjusts server fans to maintain proper cooling. Management tools have a more efficient layout with ProLiant Gen8 servers, and can be easily accessed on a single screen.

The HPE ProLiant SL250s Gen8 server provides dual-socket performance in just a small half-width, 2U modular form factor. Ideal for businesses looking for high-performance scalability, up to four of these server nodes fit into HPE’s 4U s6500 system chassis. Each node supports up to four SFF hot-swappable drives for a maximum storage capacity of 4.8TB. For extra storage, system admins can opt to configure this system with four additional SFF drives by replacing the system’s three GPUs with an internal drive cage. Adding to the system’s customization, users have their choice of two different processor families, with v2 processors supporting more cores and cache. Remote management is made possible through HPE’s iLO 4 which is embedded on the system board of all HPE ProLiant Gen8 servers making integration a hassle-free process.