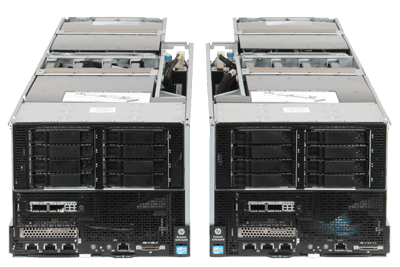 The HPE ProLiant SL270s Gen8 SE server node is a 4U, half-width blade that supports dual Intel Xeon E5-2600 v2 processors, that’s what the SE signifies. The other version without the “SE” only supports the Xeon E5-2600 v1 processors. There is a left and a right version of this compute node and must be ordered accordingly. The 4U ProLiant S6500 Chassis supports a number of different server nodes, including the SL270s Gen8 SE, and provides power, cooling, and centralized management for reduced operational costs. The HPE S6500 chassis will support only two of these server nodes and each server node supports up to eight GPU accelerators for extreme rack-level graphics processing. The GPUs are housed in a removable cage, while the memory modules and CPUs occupy the system board located under the GPU cage. This platform is ideal for high-performance computing applications in Oil & Gas, Life Sciences, Manufacturing, Research, and Finance.

A maximum of two Intel Xeon E5-2600 v2 processors with up to 12 cores are supported on the HPE SL270s Gen8 SE server node. E5-2600 v1 processors are not compatible with this platform, unless you get the non-SE version. You can start out with just a single processor and add another as business needs change. Each server module also supports up to eight GPU accelerators either from Nvidia or Intel.

Each node has 16 total DIMM slots and supports HPE SmartMemory unbuffered (UDIMM), registered (RDIMM), and Load Reduced (LRDIMM) memory modules. Use of 32GB LRDIMM modules in all 16 slots, in a dual processor configuration will provide the most memory capacity at 512GB. Using RDIMM modules the system will support up to 256GB using 16 x 16GB memory modules, or half that value when using 16 x 8GB UDIMM modules.

The front of each server blade supports eight front mounted small form factor SAS or SATA hot plug drives and supports a maximum storage capacity of 9.6TB using SAS SFF drives. Embedded on the system board is an HPE Dynamic Smart Array B320i controller but the system can also be ordered with the HPE Smart Array H220i Host Bus Adapter, which is standard equipment. If an HPE Smart Array controller is installed in the expansion card slot, the controller will default to a RAID configuration based on the number of drives installed. Flash-Backed Write Cache (FBWC) is supported on this server and includes a cache module and capacitor pack. In the event the system loses power, the capacitor will charge the system for up to 80 seconds while the controller transfers cached data from DDR to Flash memory.

A single PCIe 3.0 expansion slot is located on the front of the system and can support either a low profile card or FlexibleLOM card. Eight other PCIe 3.0 slots are located in the GPU cage and provide support for up to eight full-length, full-height GPUs. Graphics on this system are handled by an integrated Matrox G200 with integrated HPE iLO On System Management Memory of 16MB flash.

The HPE ProLiant SL270s Gen8 SE server node is specifically designed for rapid scale-out and supporting High-Performance and Hyperscale computing applications. When outfitted with dual processors and eight GPU accelerators it can deliver powerful performance for applications in the sciences, finance, and oil and gas exploration.