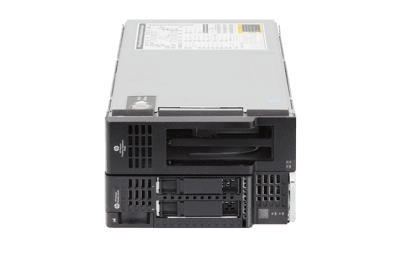 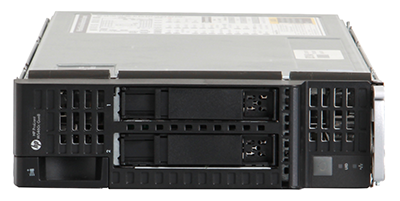 The HPE ProLiant WS460c G8 Workstation Blade can be installed in either the HPE BladeSystem c7000 or the HPE BladeSystem c3000 enclosures. The c7000 enclosure can support up to 16 single-width blades, while the c3000 enclosure will support up to eight blades. The server blade comes in two different form factors; a single-wide version and a double-wide version with graphic expansion blade. When outfitted with the Graphics Expansion Blade, which doubles the width of the module, each enclosure will support half as many blades. The single-wide blade by itself will support a maximum of two MXM graphics cards in two PCIe mezzanine slots, but with the addition of the Graphics Expansion Blade, it will support up to eight separate GPUs. Placing the workstation in the data center or server room ensures a higher level of data protection, the ability to virtualize the resources on the workstation blade, and lowers the cost per user while delivering a dedicated GPU per user over the network. It also supports graphic acceleration capabilities for virtual desktop infrastructures (VDI) at less than half the cost when compared to the previous generation.

The Intel C600 series chipset supports one or two of either the Intel Xeon E5-2600 or E5-2600 v2 processor families with up to twelve cores. When paired with the Graphics Expansion Blade, the system will also support additional graphic accelerators.

To get the most out of the system, HPE recommends using HPE SmartMemory which has been vetted by HPE to ensure reliability, performance, and a faster ROI. Administrators can choose from either registered (RDIMM), load reduced (LRDIMM) or unbuffered (UDIMM) memory modules. Load reduced DIMM modules provide the most memory capacity at a maximum of 512GB using 16x 32GB DDR3 memory modules with a dual processor configuration.

There is room for a maximum of two SFF SAS/SATA SSDs or HDDs on the front of the server blade. An integrated HPE SmartArray P220i HD/RAID controller supports limited RAID of 0 or 1. There is also an optional HPE D2200sb Storage Blade for direct attached storage, that is compatible with the single-width blade only, and offers up to 12 additional storage devices of direct attached storage. An optional dual port Fibre Channel mezzanine card enables redundant SAN (Storage Area Network) connections. 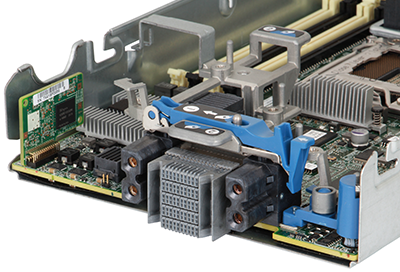 Two I/O expansion or graphics adapter mezzanine slots are supported on the single-wide workstation server but are not available when deployed with the graphics expansion blade. Graphics are provided by an integrated Matrox G200 module that also doubles for HPE’s iLO 4.0 On System Management Memory. Dual Nvidia 500M, 1000M, or a single 3000M graphics card are supported on the single-width blade. The double-wide Graphics Expansion Blade supports one or a maximum of two double-width GPUs per Graphics Expansion Blade or up to eight 1000M graphics cards using two HPE MultiGPU PCIe cards with four GPUs each. Only the Graphics Expansion Blade supports two full-size PCIe 2.0 expansion slots. There are options for networks controllers with 10Gb and 1Gb autosensing dual port FlexFabric or FlexibleLOM.

Management is provided at the enclosure level but each blade also features HPE’s iLO 4.0 management module for out of band and remote access.

With blade servers, the enclosure provides cooling, power, networking functions, and management functions to save on space, cabling requirements, and power consumption. When ordered with the graphics expansion blade, this server can deliver a virtualized workstation experience for multiple users saving on the cost of stand-alone workstations, while providing a more secure environment that’s easily managed.

Supports up to (2) mezzanine cards