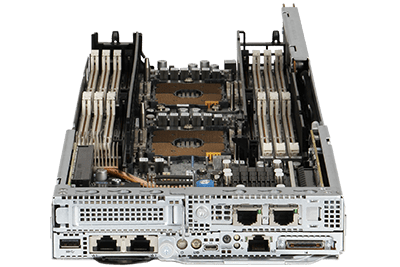 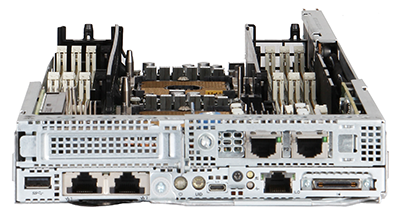 The HPE ProLiant XL170r Gen10 Server node can be used to perform a variety of standard and high-performance business applications. It’s housed in the 2U shared infrastructure HPE Apollo r2600 Gen10 Chassis, and can support up to four XL170r Gen10 server nodes. With 20 x r2600 Gen10 chassis outfitted with four nodes each, that’s 80 individual servers per rack for some high-density, high-performance computing. HPE’s ProLiant XL190r Gen10 server is also supported on this chassis and provides dual Intel Xeon Scalable processors with a maximum of two GPU accelerators. Only two XL190 Gen10 server nodes are supported.

You can install one or two Intel Xeon Scalable processors up to 150W and 4-26 cores in the HPE XL170r Gen10 server node. CPU speeds range from 1.7GHz to 3.6GHZ. Each CPU supports six memory channels.

Each processor supports eight memory module slots for 768GB with a single processor or up to 1.5TB using dual DDR4 128GB memory modules operating at speeds of up to 2666MT/s using Load-Reduced (LRDIMM) or Registered (RDIMM) memory modules.

Storage on this system is handled by the HPE Apollo r2600 Chassis which can support up to four of these half-height, half-width server nodes, or can be mixed with other server nodes. The HPE r2600 Chassis supports up to 24 x 2.5-inch storage devices, which are automatically split between the server nodes. The Chassis supports SATA, SAS, and NVMe storage devices in the same chassis. Storage devices can be mixed and matched to support business goals. A specific riser option supports dual M.2 storage devices and there is a micro SD card slot on the motherboard. The server node has an integrated S100i software RAID controller but there are other options for SmartArray Gen10 HD Controllers, Host bus Adapters, and Converged Network Adapters that can reside in the PCIe expansion slots.

With one or two processors the HPE XL170r Gen10 server will support a maximum of two x16 PCIe Gen3 expansion slots. The expansion slots require two separate risers. An optional riser supports one or two M.2 storage devices to support your OS. Another riser option supports a FlexibleLOM, or Lan on Motherboard. With the M.2 riser installed and six drives assigned from the up-front storage in the Chassis, the M.2s are assigned drive numbers 7 and 8 respectively.

Centralized management of the system is through an optional Rack Consolidation Module which mounts on the back of the HPE Apollo R2600 chassis. The RCM allows you to link several Apollo chassis together for iLO aggregation. Each of the server nodes support HPE’s integrated out of band integrated Lights out management module and HPE’s OneView Standard for inventory, health monitoring, alerting, and reporting across multiple generations of HPE and third party tools.

This is a building block for the high-density shared-infrastructure Apollo r2600 Chassis. The HPE ProLiant XL170r Gen10 server node provides the dual processor performance and up to 1.5tb of memory per chassis for up to eight processors, and up to 6TB maximum in a 2U space. It’s easy to add capacity to your network with either a single server node or a wholly outfitted Apollo Chassis.