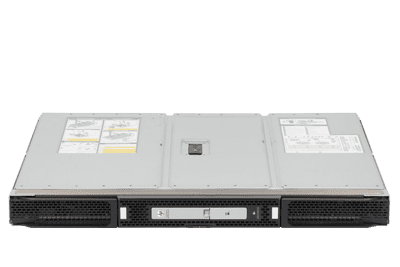 The HPE Integrity Superdome X enclosure is a foundational building block for the Superdome X and can support one to eight HPE BL920 Gen9 server blades vertically. The modular design of the enclosure delivers superb scalability for mission critical computing, and provides the power, cooling, management, and networking for the supported server nodes. Each enclosure supports 15 fans, 12 power supplies, two Onboard Administrator (OA) modules, 2 Global Partitioning Service Modules (GPSM) and four HPE Crossbar Fabric Modules (XFMs). Hard partitioning or nPar physically separates cell boards, which in turn operate independently of other groups of cell boards and ensures that other partitions are not affected by single point failures caused by hardware or software events in other partitions. With Eight BL920s Gen9 server blades installed, each enclosure will support up to 16 processors, and up to 48TB of storage.

Each blade supports up to 48 DDR3 (with v3 processors) or DDR4 (with v4 processors) with two CPUs installed, or 24 memory modules per processor. With a full complement of 128GB memory modules, each blade will support up to 6TB. A minimal configuration requires two 16GB memory modules for 32GB total. The blades support cache and double-chip spare, which is a firmware function that effectively detects and corrects memory errors, and is a more cost-effective alternative to memory mirroring.

Storage is not directly supported on the server blade but the Superdome X does support Fibre Channel data connectivity and boot support with a variety of HPE storage enclosures including the HPE 3PAR StoreServe 8400/7000/7450/and 10000, among others. 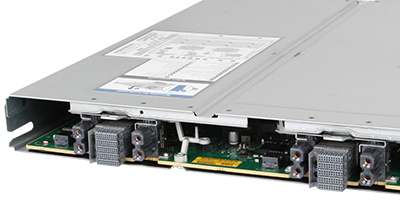 The HPE Bl920s Gen9 features three Gen three PCIe mezzanine slots with one x8 slot and two x16 slots. There’s also two dual port Flexible LAN on Motherboard (FlexLOM) slots to connect up with external storage enclosures. Fibre channel and LAN connectivity is supported by the interconnect modules mounted in the rear of the enclosure and provide network access for data transfers. The IO cards mounted in the server blades must be matched to a complimentary interconnect module. Interconnect Modules have specific location numbering and connect to specific server bays on the front of the enclosure.

Combinations of server components and server firmware versions may be different depending on the supported operating system. Refer to the Firmware Matrix for HPE Integrity Superdome X servers for specific supported combinations.

The HPE Superdome X BL920s server blade is a high-density, two-socket platform designed specifically for implementation with the Superdome X Enclosure. It offers scalability to support a number of mission-critical applications.

The XNC2 chipset to enable smooth, high-performance scalability from 2 to 16 sockets in addition to mission-critical class RAS features.

The following DIMMs are supported on BL920s Gen9 blades:

Power is supplied by the HPE BladeSystem Superdome Enclosure

Cooling is supplied by the HPE BladeSystem Superdome Enclosure