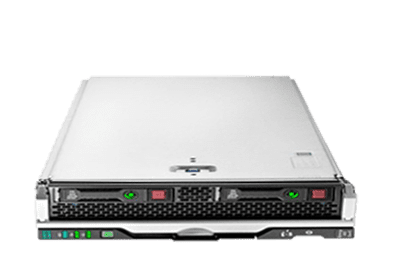 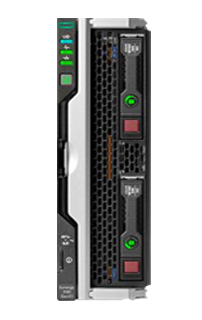 The HPE Synergy Frame 12000 can support up to 12 half-height compute nodes offering storage, plus compute and memory, all of which can be allocated at a moments’ notice with Synergy’s composable infrastructure. Both Gen9 and Gen10 Synergy compute and storage modules are supported. The composable infrastructure creates pools of compute, memory, and storage for rapid deployment of services. This system is also highly redundant ensuring high-availability of system resources. The HPE Synergy 480 Gen10 compute module offers high density with two processors and up to 3TB of memory for demanding workloads. Power and management of the system is provided at the chassis level by the 12000 Frame.

You can install one or two 1st or 2nd generation Intel Xeon Scalable processors up to 28 cores. Each processor supports six memory channels with 12 memory module slots per processor.

There are two storage bays on the front of the system that will support SATA, SAS or 2.5-inch NVMe drives depending on the model. Expansion cards can be used to connect this system to additional storage. There are two options for installing M.2 drives on this system. One uses a 2.5-inch adapter option that supports two M.2 SATA drives. One HPE SFF flash adapter can be installed in each of the two front drive bays but will also require the premium backplane. The other way, is by adding an M.2 flash drive adapter board, which also supports two M.2 drives on a circuit board that is mounted inside towards the front of the chassis, under the drive trays. RAID is supported either by the integrated HPE Smart Array S100i SR Gen10 SW RAID, which is off by default, or another HPE Smart Array. 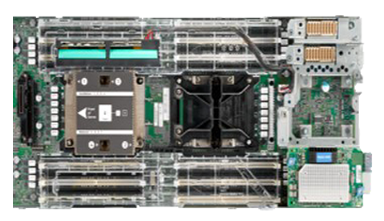 Management of the system is handled by the HPE Frame 12000 chassis, which supports an HPE Synergy Composer module powered by HPE OneView in conjunction with integrated Lights Out (iLO) Standard. Two Composers are recommended for redundancy.

The HPE Synergy 480 Gen10 Compute module is a worthy successor to the Gen9 version with support for significantly more, and faster, memory from the 2nd generation Intel Xeon Scalable processors. The HPE Frame 12000 Chassis also supports both Gen9 and Gen10 compute and storage nodes to help extend the useful life of your network hardware.

HPE Synergy 12000 Frame, is the base for all Synergy products and supports: