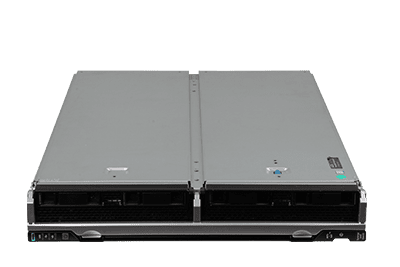 The HPE Synergy 12000 Frame enclosure is designed to run any workload using One View software. OneView provides an index for the hardware resources from which you can create a software-defined pool of virtual assets including compute, memory, storage, and fabrics. Power, cooling and management of the Synergy compute and storage modules is handled at the enclosure level. The HPE Synergy 660 Gen10 Compute module is a full-height, half-width platform that offers compute, memory, and storage assets to the mix. With only four drives, it doesn’t add a great deal of storage but you can add up to 61TB using 4 x 15.3TB 2.5-inch SSDs. The Synergy D3940 storage module supports up to 40 2.5-inch storage devices and is an ideal addition for direct attached storage (DAS) or storage area network (SAN) applications. 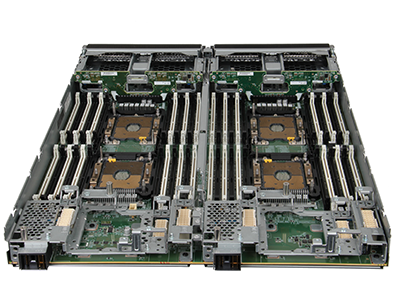 Performance on the HPE 660 Gen10 is supported by either two or four Intel Xeon Scalable processors from the Bronze, Silver, Gold or Platinum families. Each processor features six memory channels and supports 12 memory slots with two modules per channel. In a four-processor configuration that’s a total of 48 memory module slots. Only processors with an “M” will support 1.5TB of memory. Without the “M” designation, the processors only support 768GB each.

Four 2.5-inch hot-swap SmartDrive carriers provide enhanced management and reduced maintenance issues. HPE drives from previous generation servers prior to Gen8 are not supported on either the Synergy 660 Gen10 or Gen9 server modules. SATA drives are supported natively on the system but if you plan on using SAS drives, or up to four 2.5-inch NVMe drives, then you will need a Premium Backplane Compute Module option and an optional Storage Controller. Also supported are up to four M.2 storage devices A micro SDHC slot and Internal USB slot are intended to support virtualized environments with a hypervisor. 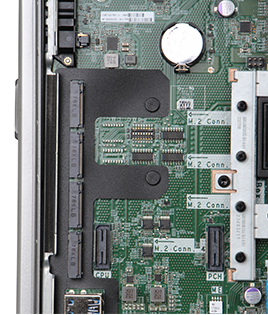 The chassis supports up to six mezzanine connectors, each of which can connect to an interconnect module in the upper portion of the chassis, with redundant Interconnect modules housed in the lower portion of the chassis. There are several Interconnect Module options supporting anywhere from 10Gb/s to 50Gb/s using Infiniband connections with QSFP+. Refer to the HPE Synergy 12000 Frame page for more information. (Make this a link to the HPE Synergy 12000 Frame page.) You can also install up to three storage controllers, depending on model, to access direct attached storage (DAS) modules, like the HPE Synergy D3940 Storage module, which supports up to 40 x 2.5-inch storage devices. An Integrated Matrox G200eH2 video standard provides graphic support.

Management of the system is handled at the enclosure level by HPE’s OneView, one to many management software. OneView is loaded on one, or more, HPE Synergy Composers housed in the Frame chassis, which accesses the integrated Lights Out module on the compute blades for system information and status. OneView enables the system to catalogue the hardware components of compute, memory, storage, and fabrics as virtual assets which can then be “composed” to support a number of specific workloads, all within the same chassis. The Composable infrastructure also allows for rapid allocation or reallocation of resources, plus the ability to incorporate and deploy bare-metal servers into a running OS. 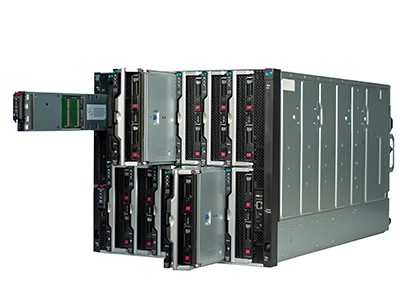 HPE’s Synergy 12000 Frame offers full redundancy within a single Frame or across multiple frames. HPE’s Synergy 660 Compute Module provides a general use platform that can be used to support a number of different workloads, and provides compute, memory, storage, and access to fabrics that can then be used as virtual assets when indexed by HPE’s OneView management software. Up to six of these full-height server modules can be installed in a single 12000 Frame, plus a combination of other compute and storage module form factors.

up to 4 Intel® Xeon® Scalable Processors

All network interfaces are handled by the HPE Synergy 12000 Frame